This episode of our podcast takes us in an interesting direction, as our special guests Brent Andersen and Jennifer Boone from the Loveland Living Planet Aquarium stop in to chat and talk about the unique partnership they share with Harmons. 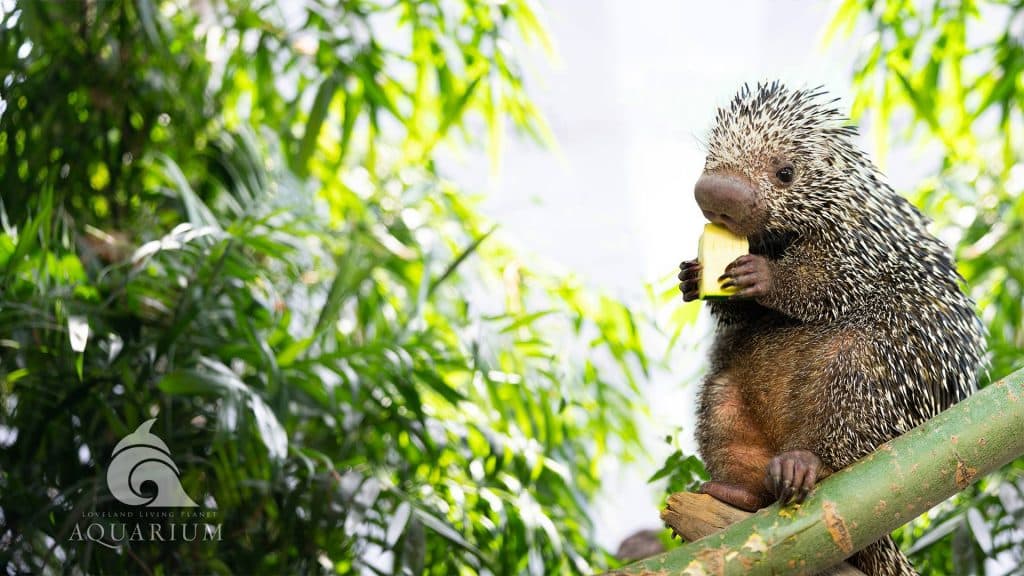 If you’ve driven on I-15 near Draper and the Loveland Living Planet Aquarium, you’ve undoubtedly seen the massive metal object protruding toward the sky. The 190-ton steel structure has a fascinating history, but more importantly, it has an important future: teaching humans about sustainability and preserving and improving the health of our planet.

Once known as the Claw, the futuristic-looking structure was used by the band U2 during their 360° tour. Brent Andersen, founder and CEO of the aquarium, first spotted it when he attended a U2 concert in France, and he couldn’t take his eyes off it. When he found out one of the three Claws made for the tour was for sale, he decided it would be a great addition to the aquarium.

In October 2019 the structure was finally erected on the aquarium grounds, and “she” was affectionally renamed EECO—Ecosystem Exploration Craft and Observatory.

Brent Andersen describes her as a futuristic vessel. The round stage beneath the claw is actually the roof of a building that goes underground, and future plans include a virtual reality experience, where people can go anywhere in the world—and back and forth in time—by putting on VR goggles.

Brent is a marine biologist who found his love of the vast and diverse oceans early in life, and conservation and sustainability is an important concept to him and his staff at the aquarium.

As fascinating as all of this is, you might be wondering why Harmons has a podcast with an aquarium. The answer is we have a partnership with them where we provide food for the thousands of animal inhabitants they house. 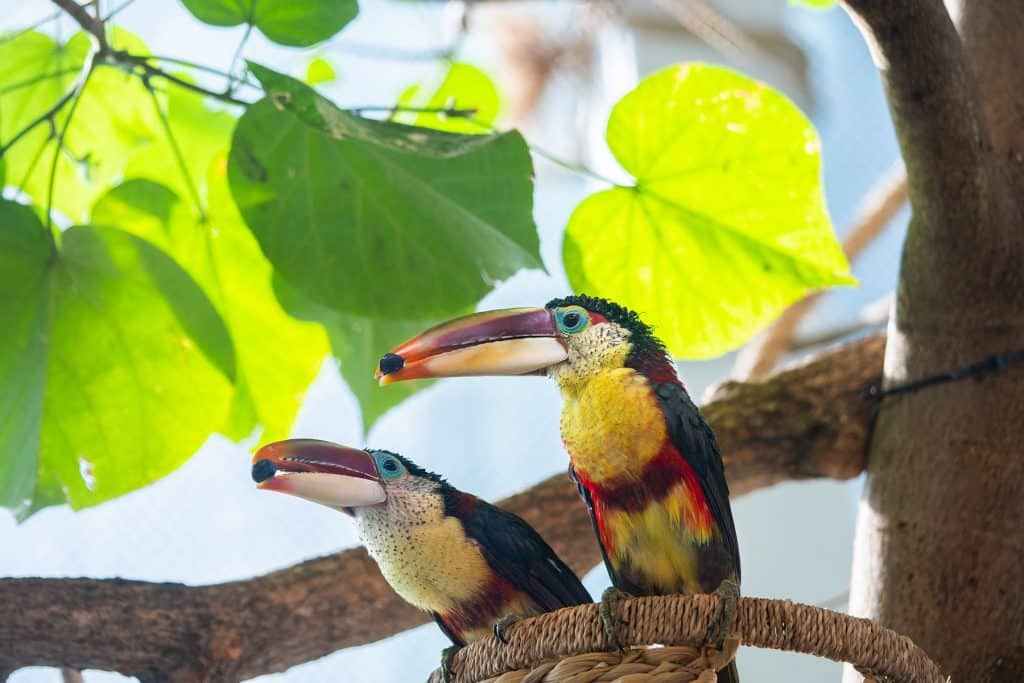 Jennifer Boone is an endotherm keeper at Loveland Living Planet Aquarium, and in the podcast she explains her role of caring for and feeding the birds and mammals. Responsible for food planning and preparation, along with training and general care, Jenn clearly loves her job, and she emphasizes the fact that good quality food keeps the animals healthy, just like it does for people.

For both species, Harmons is glad to step in and help.

One of Jenn’s favorites (don’t tell the others) is Darwin, a prehensile-tailed porcupine, who has a great love for exotic dragon fruit. Lucky for him, Harmons carries this and other hard-to-find produce, making the job of acquiring favored snacks easier on the keepers.

Tune in to the podcast to learn more about Brent Andersen, Jennifer Boone, and all of the animals, and also to find out what LLPA is doing to help save our earth and encourage sustainability and conservationism.

After you listen, make sure to download the Monterey Bay Aquarium’s Seafood Watch App, and do your part to help sustain our oceans for years to come.

Despite growing up in landlocked Utah, Brent Andersen’s curiosity for marine life was sparked by a gift he received as a child. His grandmother gave him a book about the ocean, and his curiosity grew into a passionate pursuit that led him to a degree in marine biology from the University of California, Santa Barbara. His real dream was to share his passion with the children of Utah, and with the idea keeping him up at night, he decided to follow through and open an aquarium–Loveland Living Planet Aquarium, to be exact. This is a major personal accomplishment for Andersen, but from his perspective, he is just getting started. As long as there are conservation needs on the planet, and opportunities to help audiences learn and grow in their connection to and understanding of nature, he will be working to keep expanding the reach and mission of LLPA. 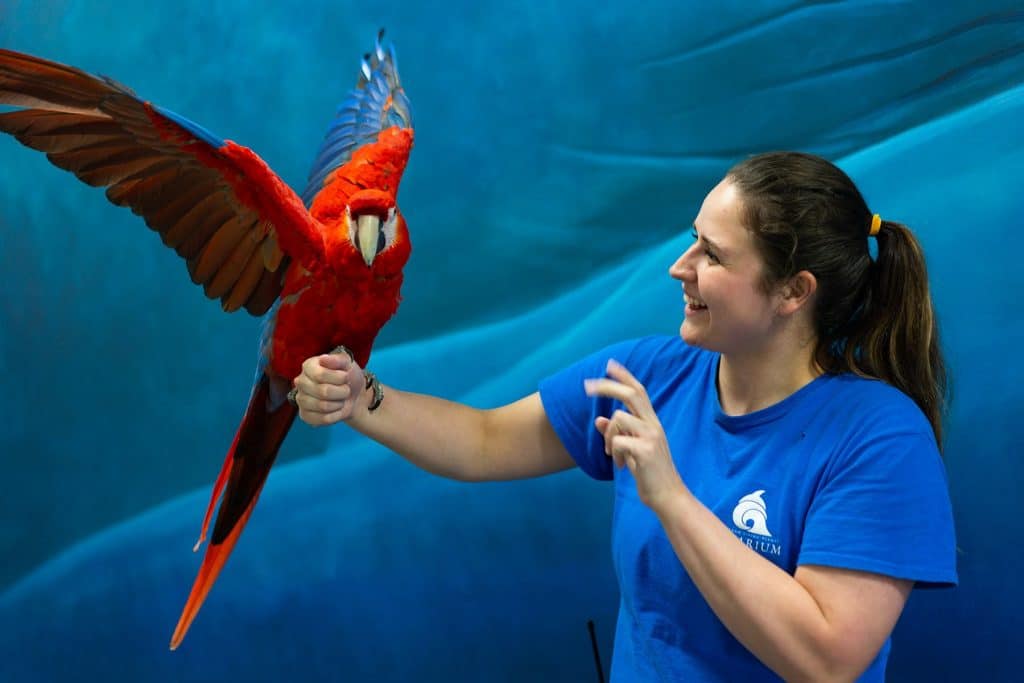 Jenn Boone has always had a passion for animals. Born and raised in Southern California, she often spent her time at the beach or hiking along the small trails by her house. Her dream job changed constantly, but with one common theme: it always revolved around animals. In 2010 Jenn moved to Utah to pursue a degree in wildlife and wildlands conservation at Brigham Young University. Throughout the years, Jenn has worked as a veterinary technician, wildlife rehabber, and educator, but by far, her favorite job is being a keeper. She has worked at two zoological facilities in Utah as well as one in Washington. Loveland Living Planet Aquarium has been her home for more than three years now, and she works as a keeper and trainer for the endotherm team.