In this episode of the Taste of Harmons Podcast, Chef Casey Bowthorpe joins our hosts Chef Lesli Sommerdorf and Brandon Young to discuss his career with Harmons. In an interesting journey, he joined Harmons as an associate in 2007. But he held many positions, including dairy manager and café manager, before he took a job as the cooking school coordinator in 2013. It was then that the “chef” fire was lit.

Chef Casey took a three-month sabbatical from Harmons to work as an intern at a New York restaurant. But when he was ready to return to his position as cooking school coordinator, he was instead offered a job as sous chef. After that, he ended up attending culinary school.

As a 14-year Harmons associate, you’ll want to tune in to learn about his fascinating career path, and his love for food. Chef Casey specializes in many things, but he is known for his meat-based meals and also desserts.

To sign up for Chef Casey’s cooking classes, along with those offered by our other amazing chefs, click here. 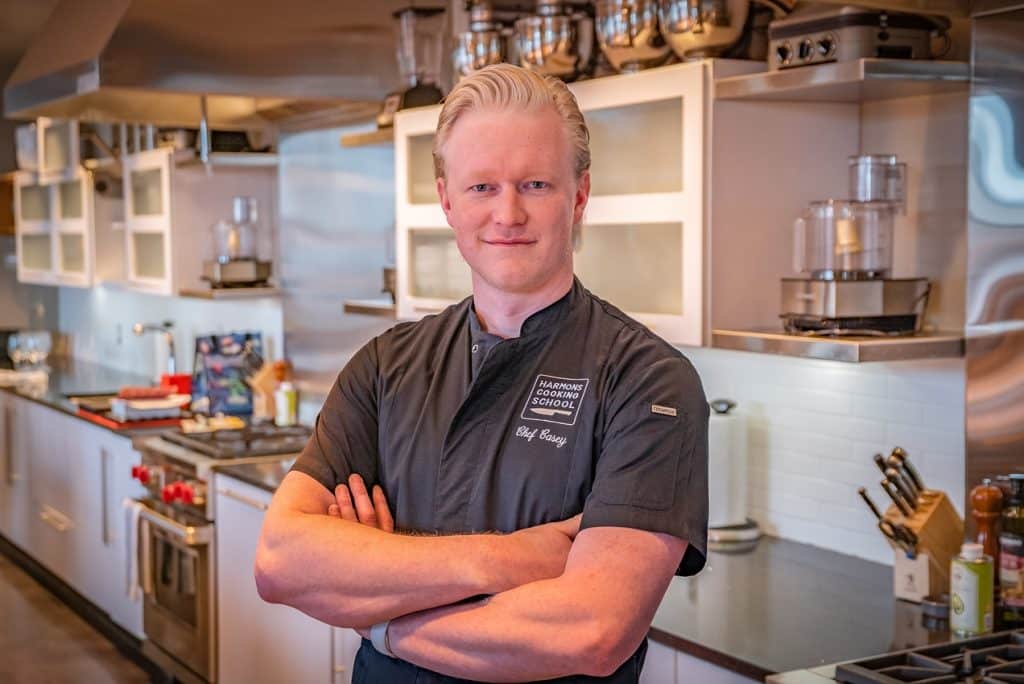 After joining Harmons as an associate in 2007, Chef Casey Bowthorpe discovered a calling in food. In 2013, he joined Harmons Cooking School as a cooking school coordinator and also assisted other Harmons chefs in cooking classes, exploring his taste for creative fare and soaking in the education.

Chef Casey spent some time in New York working with top chefs, including Alicia Walter of Once Upon a Tart and Chef Cynthia Sestito of Cynful Foods.

In 2018, he graduated from the Park City Culinary Institute, where he “learned to get nerdy” with food.

Chef Casey loves mixing things together and putting it into an omelet or serving it with a fried egg. He also likes to cook seasonal dishes and enjoys finding a classic dish and reviving it with his own little creative spin.

He says the thing he likes the most about teaching at Harmons Cooking School is showing people that the best food in the world doesn’t have to be difficult. “I like breaking some of the myths and explaining why things cook or work the way they do.” From high-heat and fast-cooking to low-heat and slow-cooking, Chef Casey likes giving people the technical knowledge and confidence to understand what is required. He especially feels gratified knowing no matter where they are, they will know what method they are going to use for the best results.

If you enjoyed this podcast, listen to our other episodes here. Recent episodes include “Local Flour Power” with Lehi Mills and “The Coral Reef Rescue” with Brent Anderson of the Loveland Living Planet Aquarium.