Our seasoned chefs impart the best techniques for turning an ordinary meal into a culinary work of art.
Because our cooking classes are a mask-free environment, we ask that all students be fully vaccinated before attending.

Learn from the best - Meet our Chefs 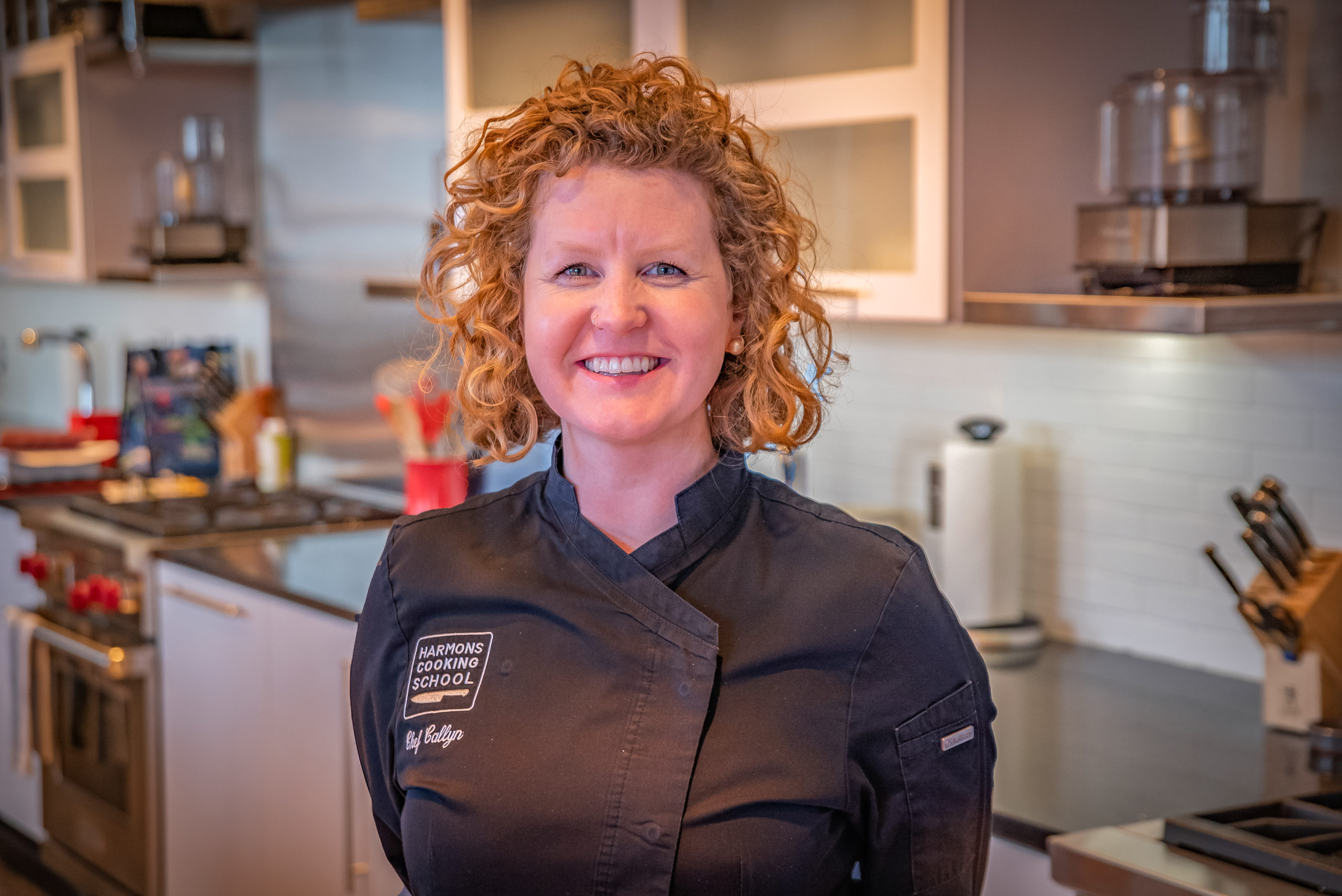 After graduating with a bachelor’s degree in graphic design, Chef Callyn Graf found herself in the kitchen more often than she was in front of her computer.

Her creative culinary concoctions quickly influenced her desire to travel, cook, and learn, and she accepted a position on a private motor yacht in St. Thomas. Traveling from Maine to the Caribbean she discovered new cultures and cuisines, and her passion for cooking and food only grew.

Years later Chef Callyn moved to New York City where she attended the Natural Gourmet Institute to study plant-based culinary techniques, focusing on cooking for dietary needs. With a new set of skills and a new-found respect for food, she found herself back on the water cooking for a professional sailing team as well as on private yachts.

After six years on the water, Chef Callyn decided it was time for a new adventure, and she and her husband ended up in Utah, achieving their dream of living close to the mountains. If she isn’t in the kitchen, she can be found trying new restaurants, enjoying a glass of red wine, skiing, practicing yoga, and cheering on the Green Bay Packers. 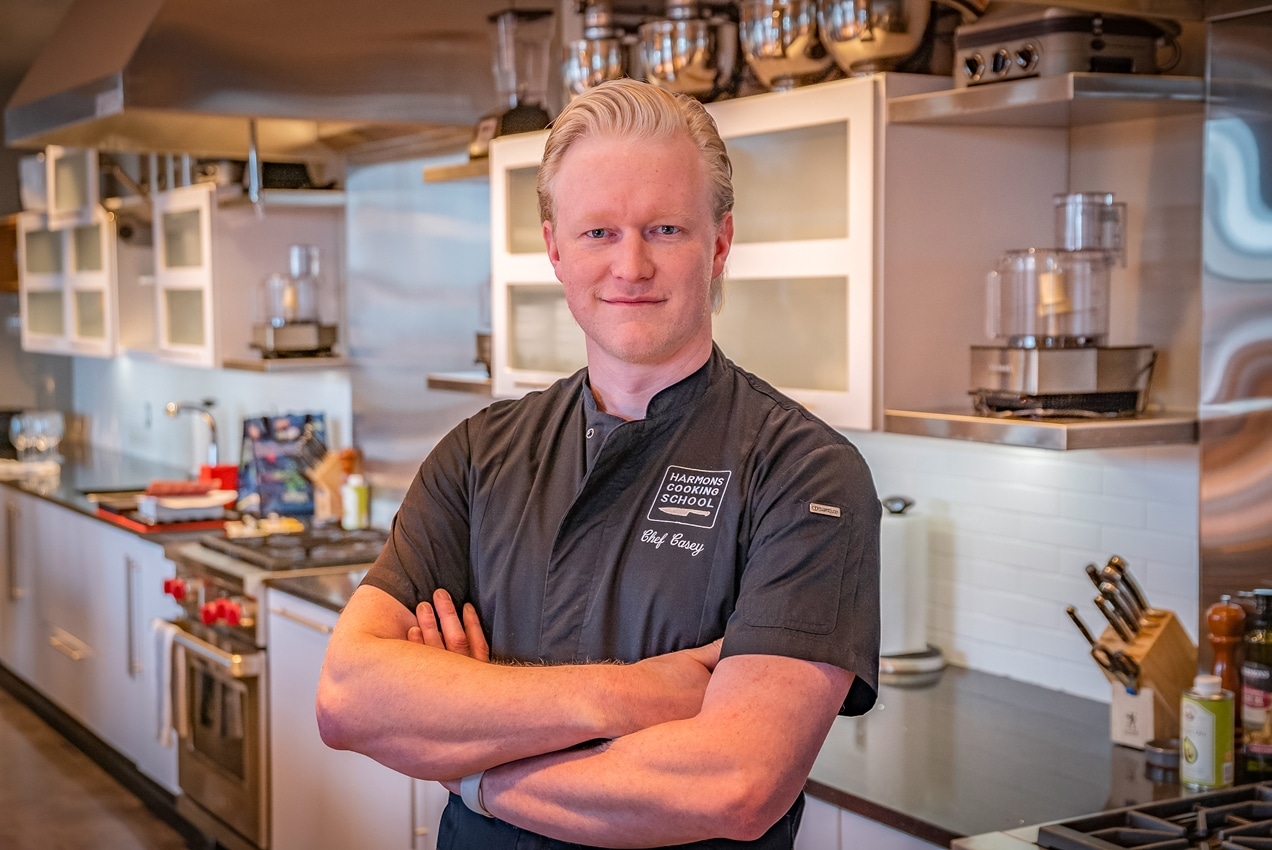 After joining Harmons as an associate in 2007, Chef Casey Bowthorpe discovered a calling in food. In 2013, he joined Harmons Cooking School as a cooking school coordinator and also assisted other Harmons chefs in cooking classes, exploring his taste for creative fare and soaking in the education.

Chef Casey spent some time in New York working with top chefs, including Alicia Walter of Once Upon a Tart and Chef Cynthia Sestito of Cynful Foods.

In 2018, he graduated from the Park City Culinary Institute, where he “learned to get nerdy” with food.

Chef Casey loves mixing things together and putting it into an omelet or serving it with a fried egg. He also likes to cook seasonal dishes and enjoys finding a classic dish and reviving it with his own little creative spin.

He says the thing he likes the most about teaching at Harmons Cooking School is showing people that the best food in the world doesn’t have to be difficult. “I like breaking some of the myths and explaining why things cook or work the way they do.” From high-heat and fast-cooking to low-heat and slow-cooking, Chef Casey likes giving people the technical knowledge and confidence to understand what is required. He especially feels gratified knowing no matter where they are, they will know what method they are going to use for the best results. 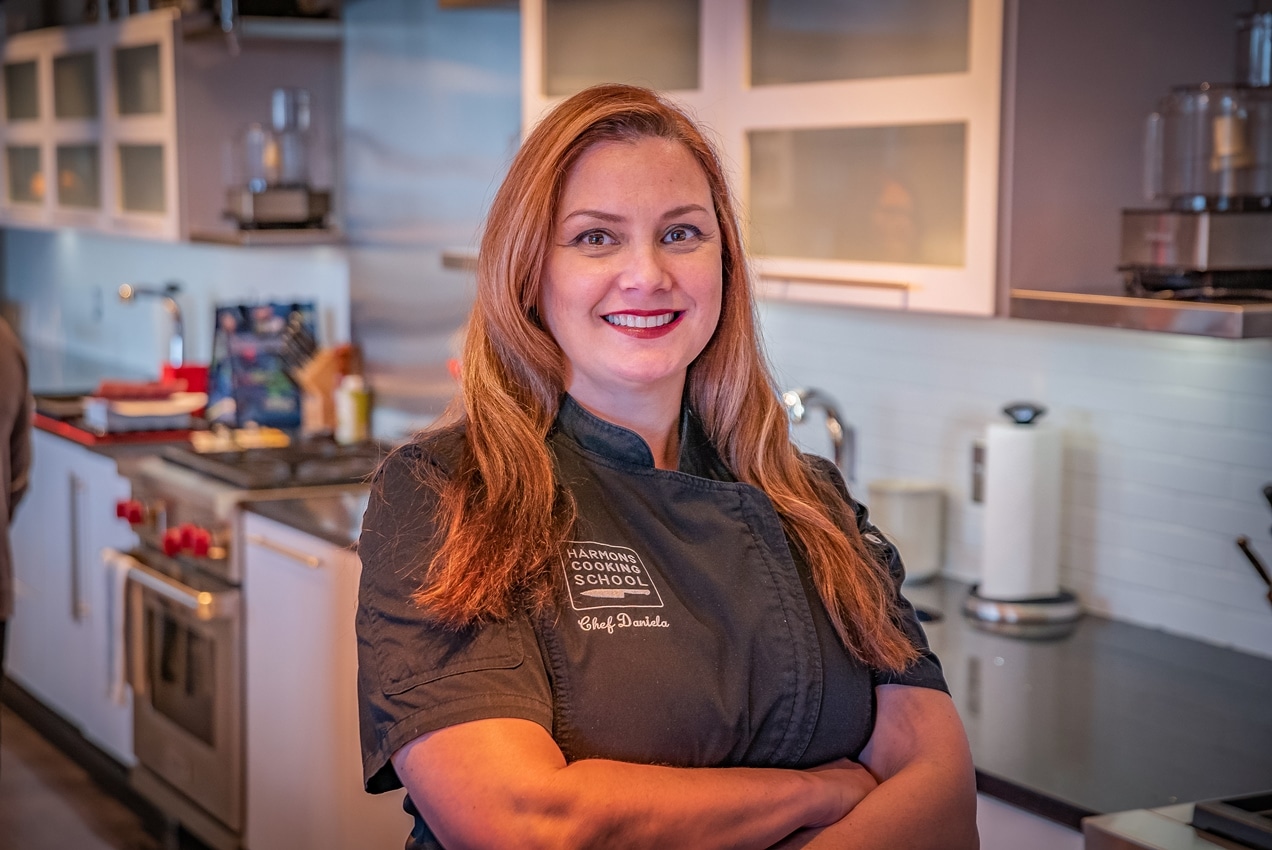 Chef Daniela de Oliveira grew up in Brazil where she learned the value of mixing ingredients to create food with a multicultural flavor. She dreamed of attending culinary school and opened up a catering company in Brasilia where she provided food for weddings, small parties, university events, and government agencies. With this experience giving her first-hand insight into what it takes to succeed in the culinary industry, she knew she had found the career she wanted.

In 2002, Chef Daniela moved to the United States where she lived in New Orleans, Los Angeles, and Portland. She gained even more passion for the industry while attending a variety of cooking classes while living in these cities.

In 2011, her dream came true when she moved to Utah and was accepted into Utah Valley University's Culinary Institute, graduating with an associate of applied science degree in culinary arts.

While working on her degree, Chef Daniela had the opportunity to hone her culinary skills as an assistant to several renowned chefs in events such as the Sundance Film Festival's ChefDance VIP dinners, and the Signature Chefs Gala of Utah.

She began her professional career in 2013 at Culinary Crafts, where her passion for cooking and skills as a culinary chef developed further, and when Culinary Crafts was awarded the exclusive contract for the University of Utah’s The Tower at Rice Eccles Stadium, she was named chef de cuisine.

In 2017, Chef Daniela redirected her professional and personal life, and made the decision to work as director of dietary services for an assisted living facility before joining Harmons at Mountain View, where she is a chef and instructor at the cooking school. 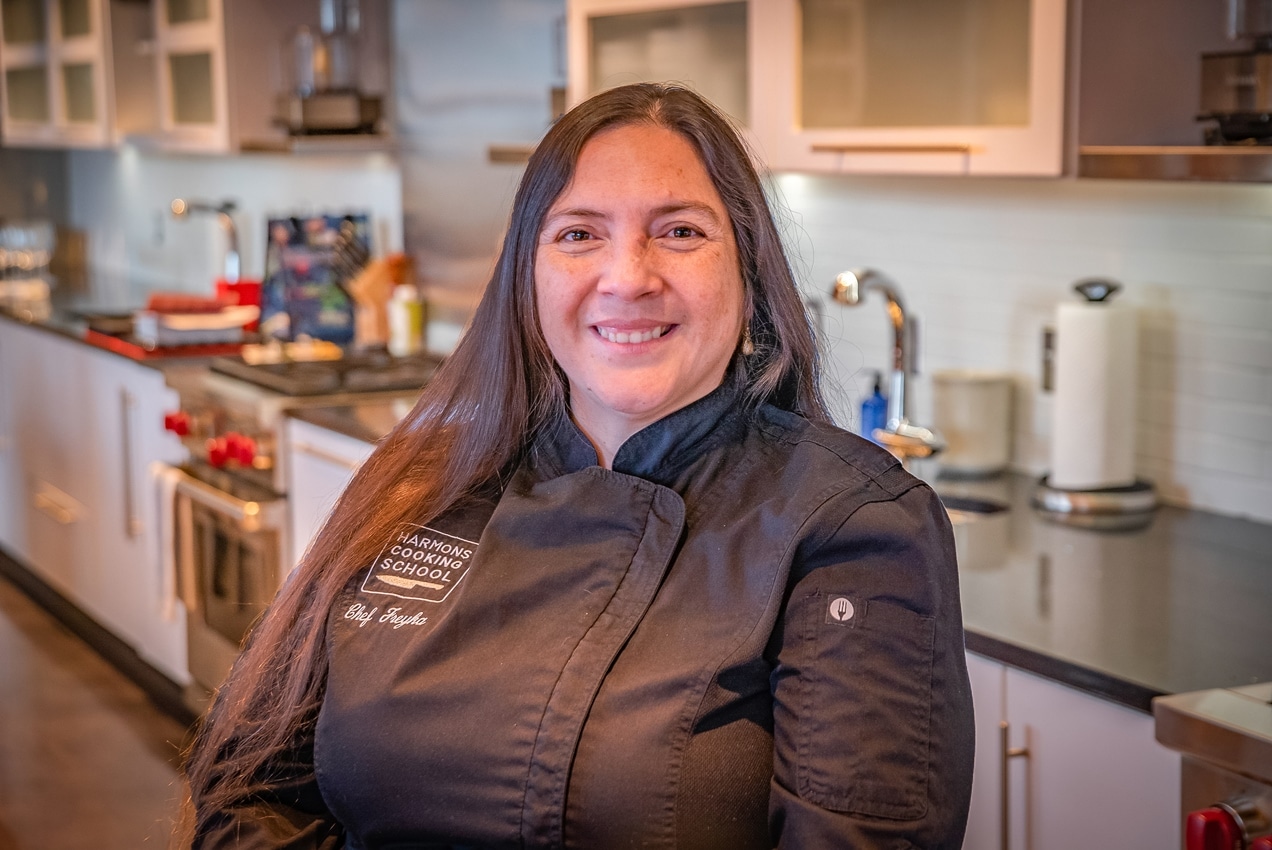 Food preparation has always been at the center of Chef Nuñez del Prado’s life. As a young child, she loved stirring pots on her Grandma’s stove and collecting magazine photos of dishes she wanted to make. By the time she was eight years old, Chef Freyka was cooking in her father’s restaurant.

Growing up in Peru, Chef Freyka was influenced by the incredible mix of cultures that make up the country’s extraordinary cuisine. Peruvian cooking combines traditions and ingredients used by old civilizations with influences from Spain, Italy, Japan, China, Africa, France, and Germany, and the result has made Peru one of the world’s top culinary destinations.

In 2004, Chef Freyka decided to pursue her love of cooking as a career and enrolled in a culinary program at Mountainland Applied Technology College.

Chef Freyka further developed and polished her cooking skills while working for several establishments, including Peppermint Place, Culinary Crafts, and Sur La Table. In recent years, Chef Freyka has been busy creating her own custom cakes and treats while writing and testing recipes for her personal blog.

Along with sharing her passion for cooking with Harmons Cooking Schools, she combines her love of family with her love of food by preparing dishes for her three children and her husband, whose father was a chef. 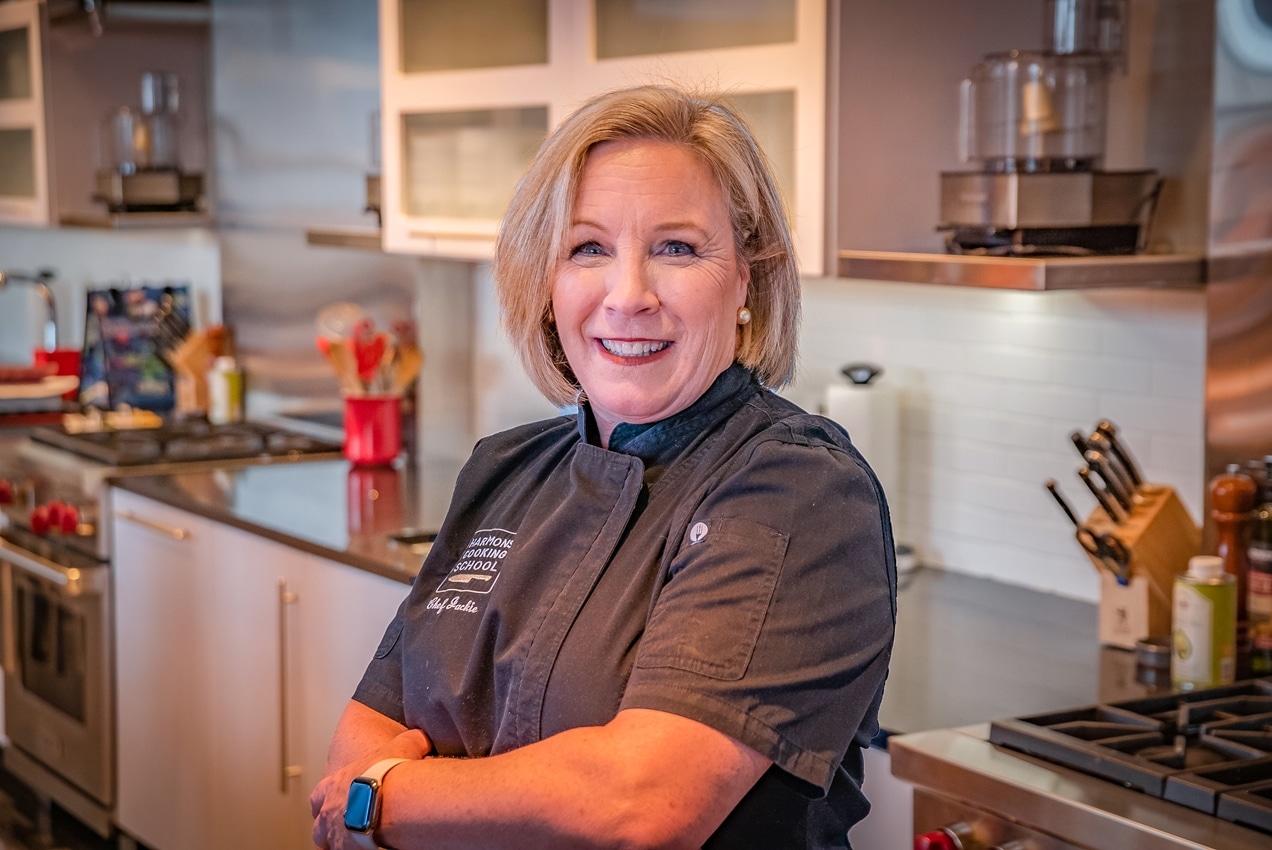 Chef Jackie Dodart has always loved to cook. She’s not sure if it all started with the gift of an Easy Bake Oven, or if it’s the fact it runs in her genes: her mother and grandmother were both excellent cooks and loved creating enjoyable meals.

Whether it runs in her blood or she acquired it at a young age, her desire to master culinary skills was very strong, and so she decided to make it her career.

A graduate of The Culinary Art Institute of Las Vegas, Chef Jackie has also attended culinary classes and schools throughout the world, learning how to create the foods and specialty dishes specific to regions and cultures.

She finds great satisfaction in sharing what she has learned throughout her culinary journey and teaching the concepts that her education and worldwide travel have provided her. 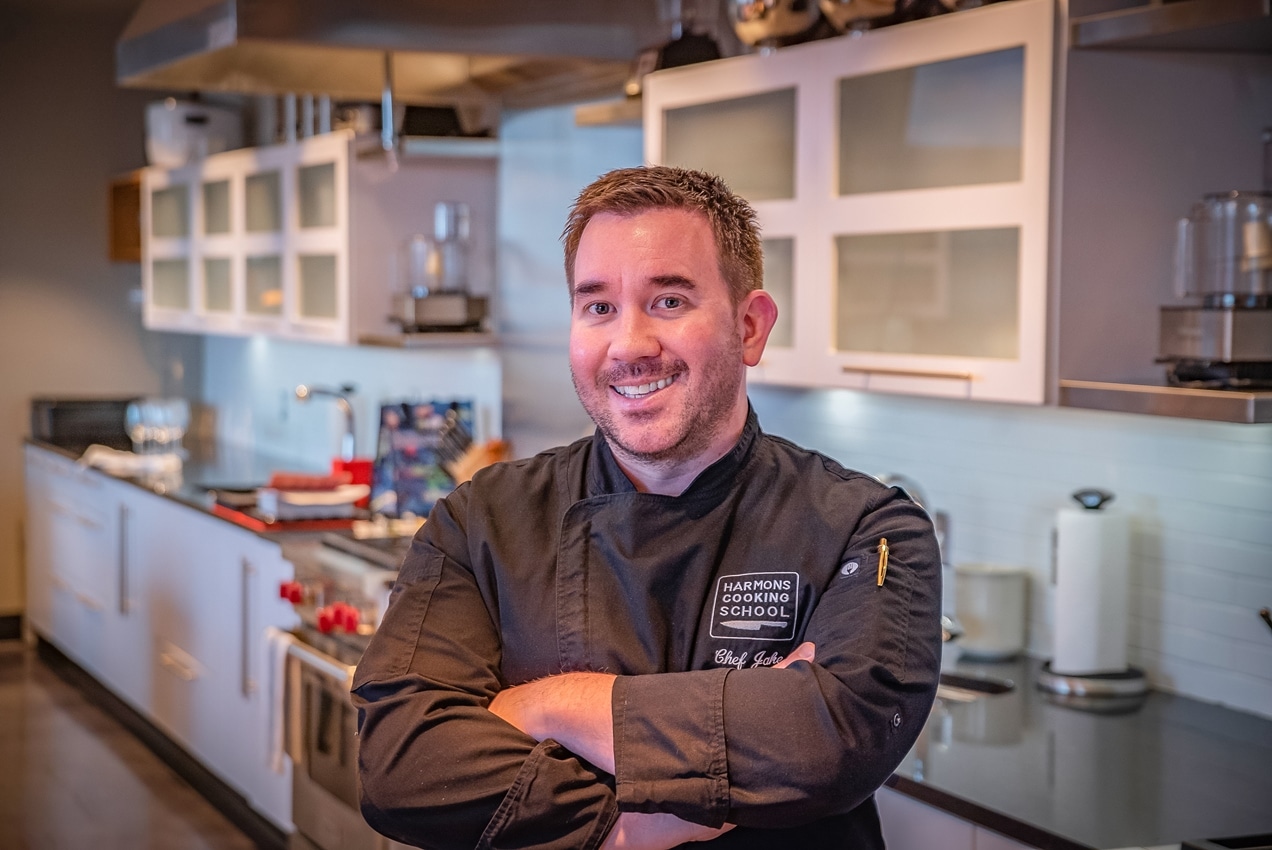 Chef Jake Driffill discovered he had a love for food and cooking at the age of 10, while spending time making holiday desserts with his mother and grandmother.

In 2002 he took a job as a line cook, and after learning some basics recognized the culinary arts as his pathway in life. He enrolled in the California Culinary Academy of San Francisco, where he learned cooking techniques from French, Japanese, Chinese, Italian, and Latin American cuisines.

In addition to his culinary education, Chef Jake also studied wine and spirits, giving him a well-rounded palate when it comes to pairing beverages with food.

Living and working in the Bay Area gave Chef Jake the chance to experience all Northern California has to offer in the culinary world. It served as an inspiration to him, and his cooking style reflects the fresh ingredients and innovation of California cuisine.

After graduating from the culinary academy, Chef Jake was eager to widen his experience in the food and beverage industry. He began seeking out renowned chefs to work with and spent as much time in the kitchen as possible. Through hard work and dedication to his craft, Chef Jake has held a variety of positions including executive chef, food and beverage director, and corporate chef. Jake loves to share his passion for food and feels that teaching others is the best way to accomplish that goal. 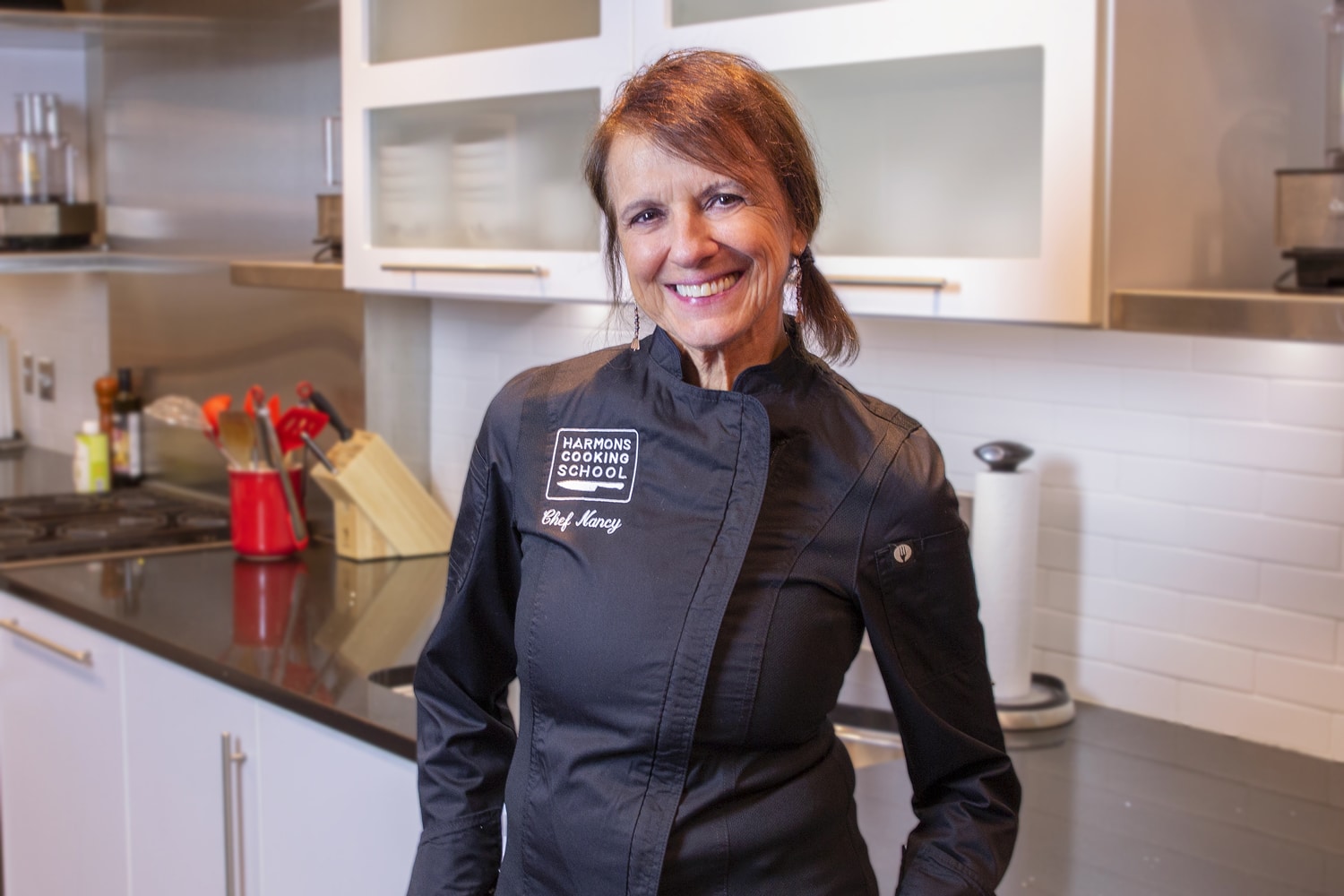 Nancy Mathieu-Carruthers is a food-industry professional with multiple years as a chef, event planner, and educator in sustainable food systems. She believes the best food in the world is often the simplest and that the interplay of simplicity, authenticity, and sophistication can coexist.

As a chef, Nancy sees her role as someone who not only creates delicious food, but someone who creates connections with food, culture, and community. Climate change, the environment, and food systems challenges are her biggest passions. She is ready to advocate for change and take a leadership role in creating a new food paradigm, and she fervently believes that our climate challenges today are not insurmountable.

Chef Nancy has a professional culinary certificate from the Institute of Culinary Education, New York City, New York. She is known for her passion in creating incredible experiences for people by creating deliciousness.

She is also known for her work and research in sustainable food systems with the European Institute of Innovation and Sustainability.

In her time off, Chef Nancy is an avid cyclist and enjoys winter hiking and skate skiing. She also enjoys working on the challenges in food systems, and said she loves culinary education. 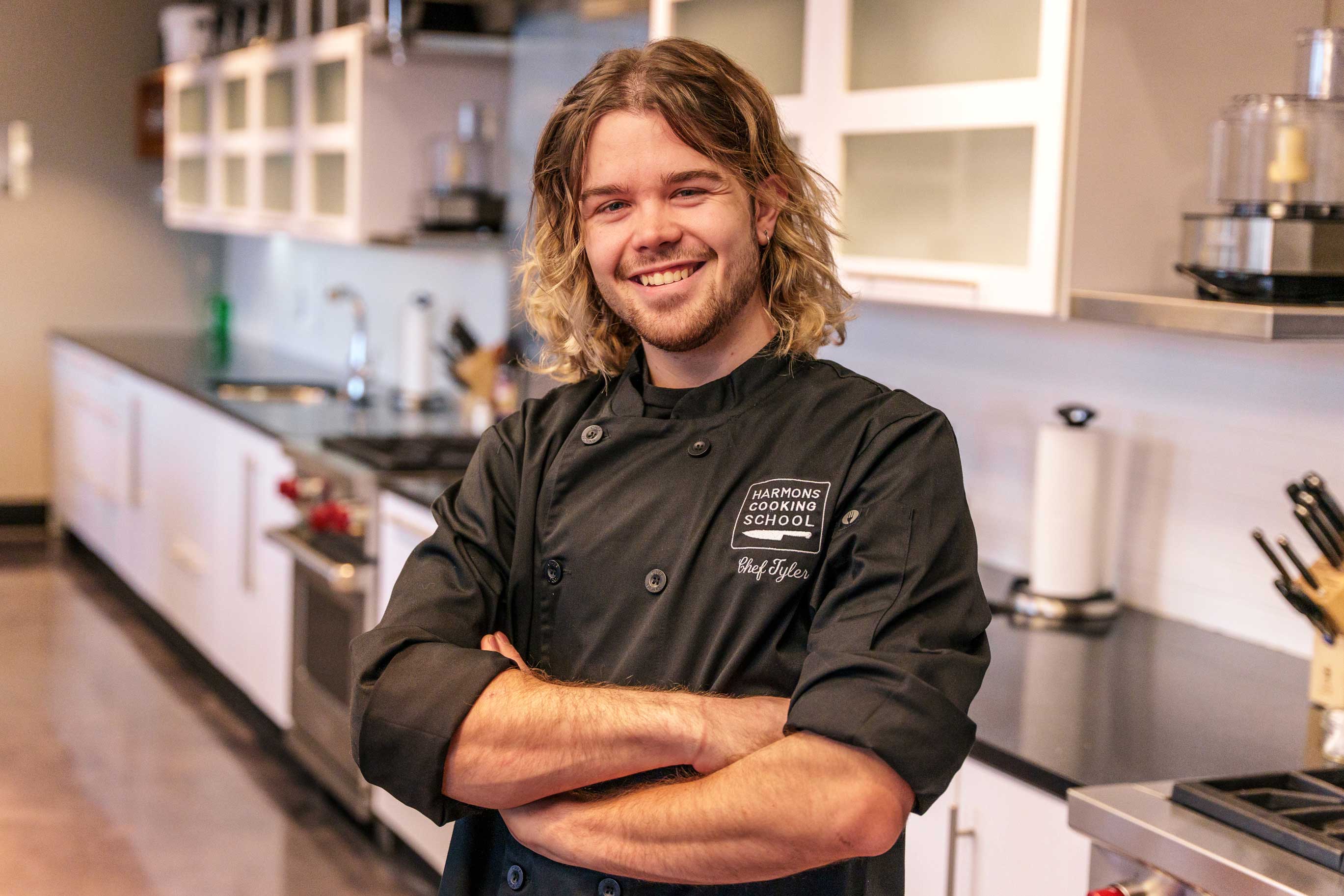 Chef Tyler Crook started his adventure into cooking in 2016 when he decided to go to culinary school at Utah Valley University. He had an innate curiosity about flavors and smells and always had a passion for tinkering and experimentation. “Culinary arts sunk its hook into me and have held on tight ever since,” he said.

As part of the program, he was required to do an externship to get real-world experience in cooking. He was awarded a scholarship and an opportunity to travel to southern France. His externship was at an 18th century farmhouse in Provence, located in the middle of the Rhone River on an island. Old and New Avignon were on either side, and wine country was very close. It was an amazing experience for a chef.

Once he graduated, he was hired as a line cook for Bon Appétit, a company that served meals to employees at Adobe in Lehi. While there he was promoted to sous chef, where he supervised and executed several stations serving an average of 1,900 people a week.

Chef Tyler said he came to work for Harmons because he could “sense the passion and the love for food right when I walked in for my interview.”
He was inspired by his family to go into this creative line of work and has always been supported and encouraged by them.

Chef Tyler’s favorite thing to make and eat would be homemade sourdough bread. “I am trying every day to get just a little bit better at it. The complex flavors and aromas, the crunch of the crust, and the chew of the crumb are second to none. I can never wait to cut into that warm bread and spread some high-quality butter with a sprinkle of flaky salt. Delicious.”

And if you showed up at his house unexpectedly, he might just whip you up come cacio e pepe, his favorite way to make pasta. “It takes such few ingredients and has such a huge flavor, for such a little effort. It can feed a crowd and will always be satisfying and delicious. Once you get the technique down, and timings, this meal can be straight up magical. Did I mention my love for pasta?”