Welcome to the seventh episode of Taste of Harmons podcast! In this episode, we were able to sit down and chat with the Caffe Ibis Director of Coffee, Brandon Despain!

Brandon travels around the world for Caffe Ibis finding the best of the best to add to their coffee line. He is here to share the Caffe Ibis story, explain how coffee is produced, direct vs. fair trade and so much more. Take a listen!

“Randy Wirth grew up near San Francisco while Sally Sears was raised just outside of New York City. They met in Northern Utah where they both had moved for the outstanding mountain environment and the local university, Utah State. After they married, their desire and passion for quality foods and organic alternatives spawned the opening of Straw Ibis Market and Café in 1976. While specialty organic coffee was still in its infancy in 1985, Randy and Sally wanted better control over quality. Caffe Ibis Coffee® was born.
Randy and Sally also wanted to develop a strong business ethic that represented a way for them to contribute to their community while making sustainable business decisions. An early mentor from the 1970s—Dr. Allen Stokes, a “birthright Quaker” and internationally recognized wildlife biologist—was a strong human rights activist and environmentalist. Randy and Sally, who were married in Allen and Alice Stokes backyard, were inspired to ask themselves “What would Allen think?” and thus, the “Allen Test” became a guiding principle of Caffe Ibis®. Over these many years, Caffe Ibis® sometimes passes and sometimes fails the “Allen Test.”’-Caffe Ibis

What is fair trade?

“Fair trade is a global movement made up of a diverse network of producers, companies, shoppers, advocates, and organizations putting people and planet first.”-Fair Trade Certified

Fair trade is one of the only independently verified certifications for coffee. It provides a safety net for the farmers and gives them a sense of empowerment. Fair trade gives the coffee communities a voice because they get to vote on what happens within fair trade.

Learn more about what causes Caffe Ibis supports and what they are doing in the community here.

On this episode, Brandon talks about the coffee farms and explains the process that the beans go through from start to finish. Take a look at the photos below to see what he’s talking about!

Want to know more about Brandon? 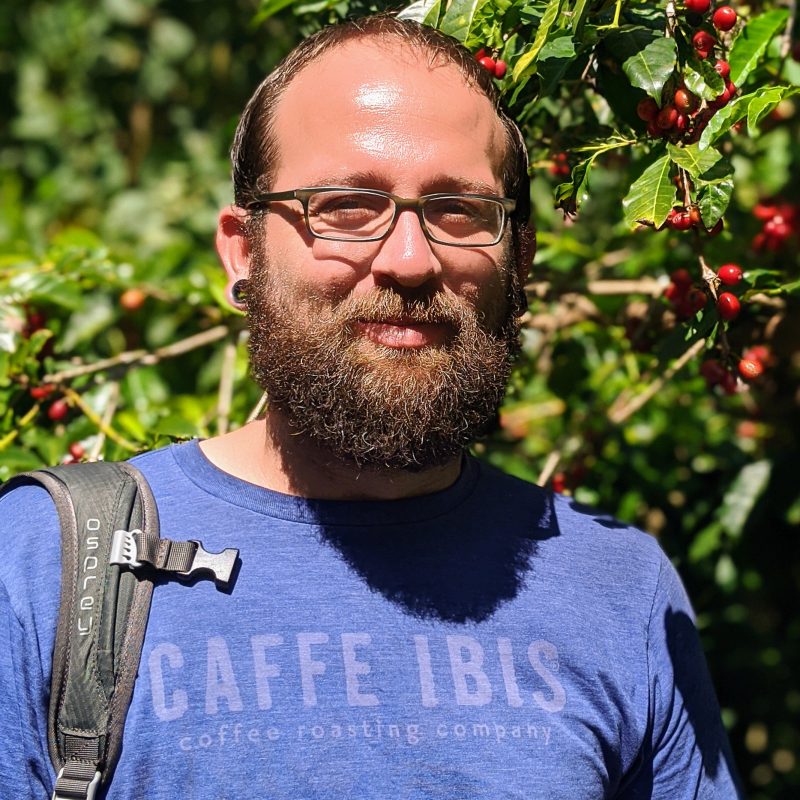 Brandon Despain is the Director of Coffee for Caffe Ibis. He has worked in coffee for 16 years as a barista, production assistant, roaster, coffee educator and green buyer. He won the 2015 United States Roasting Championship and is a certified Q-grader. Brandon spends most of his time at Caffe Ibis sourcing an amazing and diverse array of coffee, thinking about how to improve quality further (a job that never ends) and growing Caffe Ibis. His favorite coffees are naturals from any region.

You can find a variety of Caffe Ibis’s coffees here.